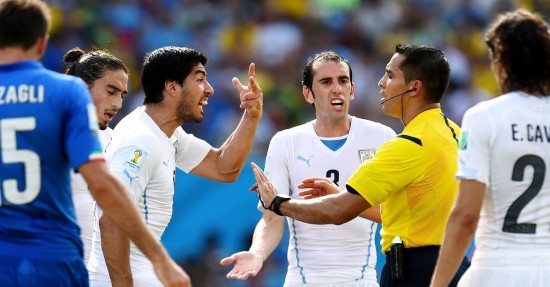 Luis Suarez, one of Uruguay’s top soccer players, apparently bit a defender on Italy’s team during their match today. Just minutes after the incident, McDonald’s official Twitter account in Uruguay tweeted at Suarez to “take a bite” of a Big Mac if he’s hungry.

Other brands quickly jumped on board!

I think it’s safe to say Uruguay was hungry for the win.

This can be your dinner… ITALIAN FLANK STEAK PINWHEELS: http://t.co/pyZoJUMm9c #WFMdish

If only Suarez had Whataburger before the game he wouldn't be so hungry.

Biting is only okay when you're made of cinnamon and sugar. #BanSuarez #WorldCup pic.twitter.com/SPsWYih153

The 18 Most Googled Women Ever According To Google

Watch This Ski Video And Try Not To...

Even if you’re not a basketball fan, you...

5 Most Expensive Basketball Sneakers of All Time

The world record for the longest ski jump